The California State University Japanese American Digitization (CSUJAD) project is pleased to announce the addition of two new, significant collections to the digital database at http://csujad.com. The materials of Fred Korematsu (1919-2005) and Aiko Herzig Yoshinaga (1925-2018), two of the giants in terms of resistance to the Japanese American incarceration during World War II and activists in the later redress movement, are now accessible online. Korematsu refused to comply with the exclusion order and mass removal, went to jail, then challenged the wartime incarceration of Japanese Americans through a number of court cases from the War Relocation Authority’s Topaz camp in Utah. After the War, Herzig Yoshinaga found proof that the government had actively sought to cover up the fact that it knew that the “military necessity” rationale for the WWII incarceration was a lie. Rather, the incarceration was caused by race prejudice, war hysteria and a failure of political leadership. She was held at three different WRA camps during the War.

The physical papers relating to Korematsu are located at the California Historical Society (CHS), one of the 29 partner institutions that have added digital assets to CSUJAD during the last few years. The personal papers of Herzig Yoshinaga are located at the CSU Dominguez Hills Gerth Archives and Special Collections, the central hub for the CSUJAD project which now contains 46,000 digitized objects relating to Japanese Americans during the 20th century, from immigration through redress and beyond.

“The CSUJAD project was founded on the idea that materials boxed in archives should be accessible to students and scholars everywhere. The Korematsu and Herzig Yoshinaga materials are reflective of the wealth of documentary evidence that can still be revealed,” said Greg Williams, Director, Gerth Archives & Special Collections at CSUDH. 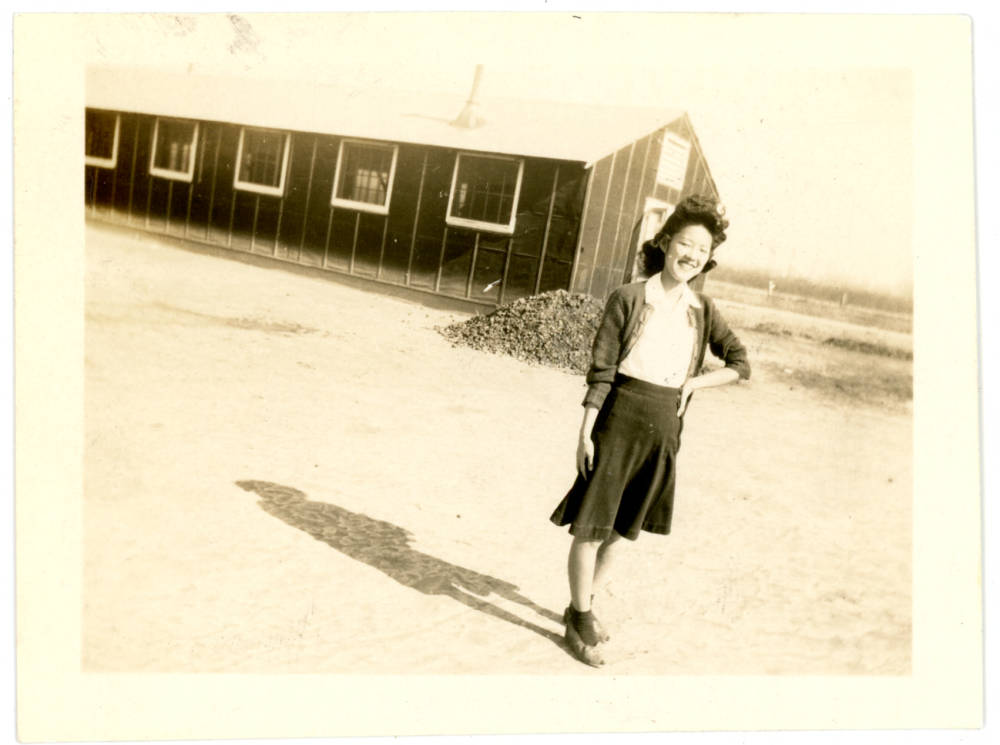 Aiko Herzig Yoshinaga's collection focuses on her family life and her work as an activist fighting for social justice. She is best known for uncovering the "smoking gun" evidence—an original draft (with editorial deletions suggested) of the government’s final report on the WWII incarceration, along with instructions to destroy the original documents—that led to the passage of the Civil Liberties Act of 1988, resulting in redress and reparations for the incarceration of Japanese Americans during World War II. This proof was pivotal to the Supreme Court coram nobis petitions to vacate the wartime convictions of Fred Korematsu, Gordon Hirabayashi and Minoru Yasui for violating military orders under Executive Order 9066. These measures were implemented after the Japanese attack on Pearl Harbor by President Franklin Roosevelt and led to the incarceration of 120,000 Americans of Japanese descent in “camps” located in isolated parts of the U.S.

At CSUDH, the Herzig Yoshinaga papers consist of 60 boxes of personal and professional materials including photographs that document Herzig Yoshinaga’s pre-war life and the time spent in WWII incarceration camps as well as correspondence related to civil rights activism and the Commission on Wartime Relocation. There are over 700 images to date: Aiko Herzig Yoshinaga Papers. The descriptive guide to her collection can be found here: Aiko Herzig Yoshinaga Papers. Additional correspondence and other archival objects will be digitized this year. In the process of Herzig Yoshinaga’s 1980s archival research, she identified problematic terms and euphemisms that were deliberately used to obscure and conceal the WWII incarceration of Japanese American citizens under the fraudulent rationale of ‘military necessity.’ She published her findings in, WORDS CAN LIE or CLARIFY: Terminology of the World War II Incarceration of Japanese Americans. Her research notes are located at UCLA. 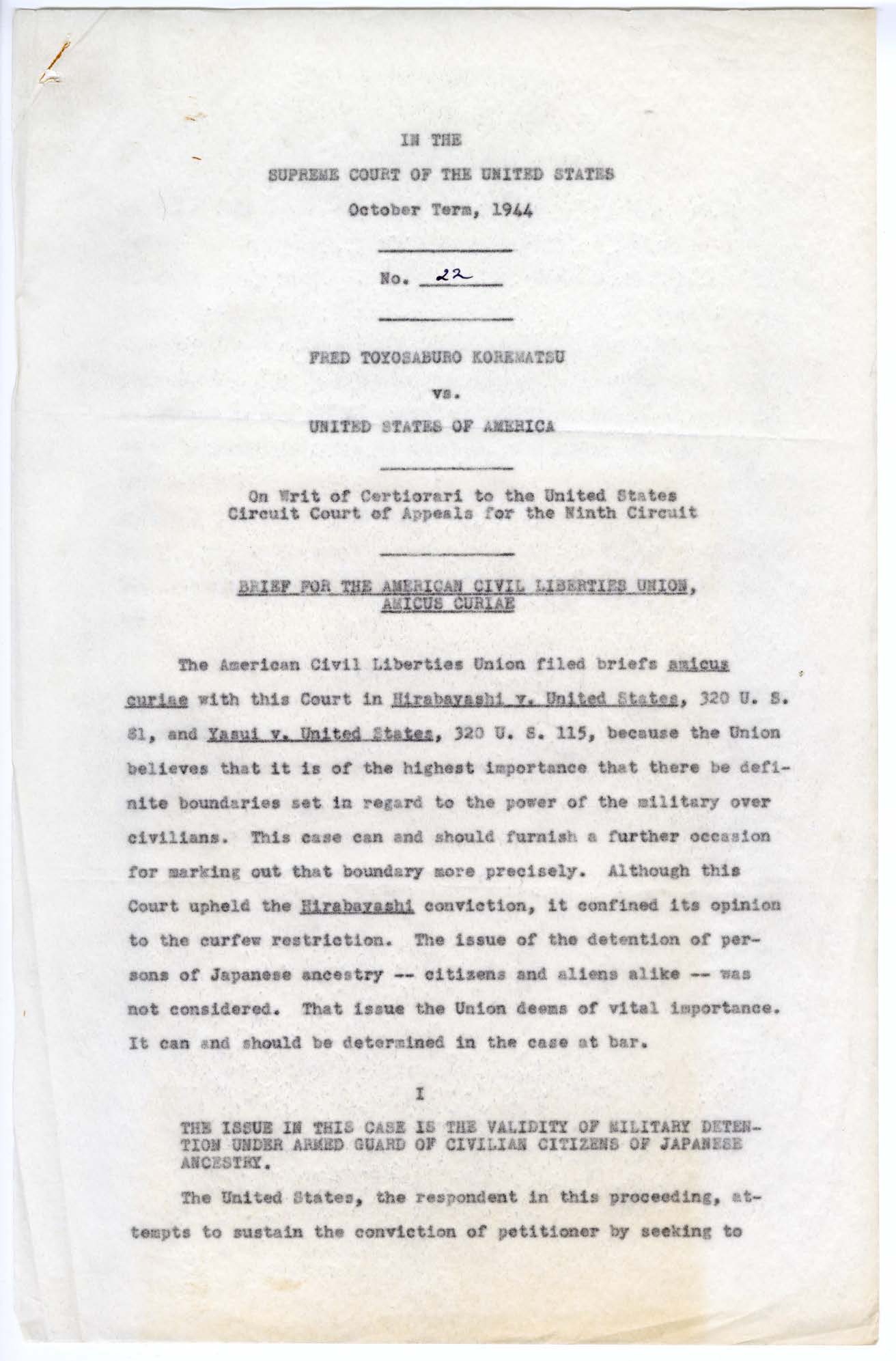 The Korematsu letters are part of the CHS’s American Civil Liberties Union of Northern California Records. They include an extensive collection of personal correspondence between Korematsu and Ernest Besig, Director of the ACLU-NC as well as court documents related to the Korematsu case that reached the US Supreme Court. The case revolved around Korematsu’s attempt to avoid being sent to the WRA camps. Upon his arrest, Korematsu, with the help of Besig, decided to fight this infringement of his civil rights. The ACLU files at CHS document a broad swath of issues relating to the WWII incarceration, include court documents as the case worked its way to the Supreme Court, and cover the correspondence from ACLU head Roger Baldwin, civil liberties attorney Wayne Collins and others. The letters focus on Korematsu v. the United States, but also provide a very personal record of how Korematsu felt about being first imprisoned then detained in WRA camps. Letters reveal the story of Korematsu dating a young white woman and his hopes that in marrying her, he might possibly be released. The pressure placed on the young woman for dating a Japanese American man, who also challenged the wartime authorities, and the long-distance relationship brought on by incarceration, ended this inter-racial relationship. Korematsu’s letters came from Tanforan Assembly Center, Topaz, Salt Lake City and Detroit, Michigan, where he worked after the war.

CSH also recently provided important digitized materials from the Joseph R. Goodman Collection documenting the organized resistance to the incarceration. Included in the collection are records of the Japanese Young Men's Christian Association, including papers of the Japanese YMCA's executive secretary and civil rights advocate, Lincoln Kanai.  Goodman, an activist, also taught high school at the Topaz Camp during the war. Other, important additions from CHS/ACLU collection relate to the Supreme Court cases of Mitsuye Endo and Gordon Hirabayashi. These archival materials will soon be added to the CSUJAD database.

According to a January 30, 2015 news release from the ACLU of Northern California “Fred Korematsu became a national civil rights icon for defying the U.S. government's forced incarceration of Americans of Japanese ancestry during World War II. When President Clinton awarded Mr. Korematsu the Presidential Medal of Freedom, America’s highest civilian honor, he stated, ‘In the long history of our country's constant search for justice, some names of ordinary citizens stand for millions of souls. Plessy, Brown, Parks - to that distinguished list, today we add the name of Fred Korematsu.’ Fred Korematsu Day of Civil Liberties and the Constitution (celebrated in California and other states on January 30th ) is the first Day named after an Asian American. Today, the Fred T. Korematsu Institute advances racial equity, social justice, and human rights for all through their educational activities. 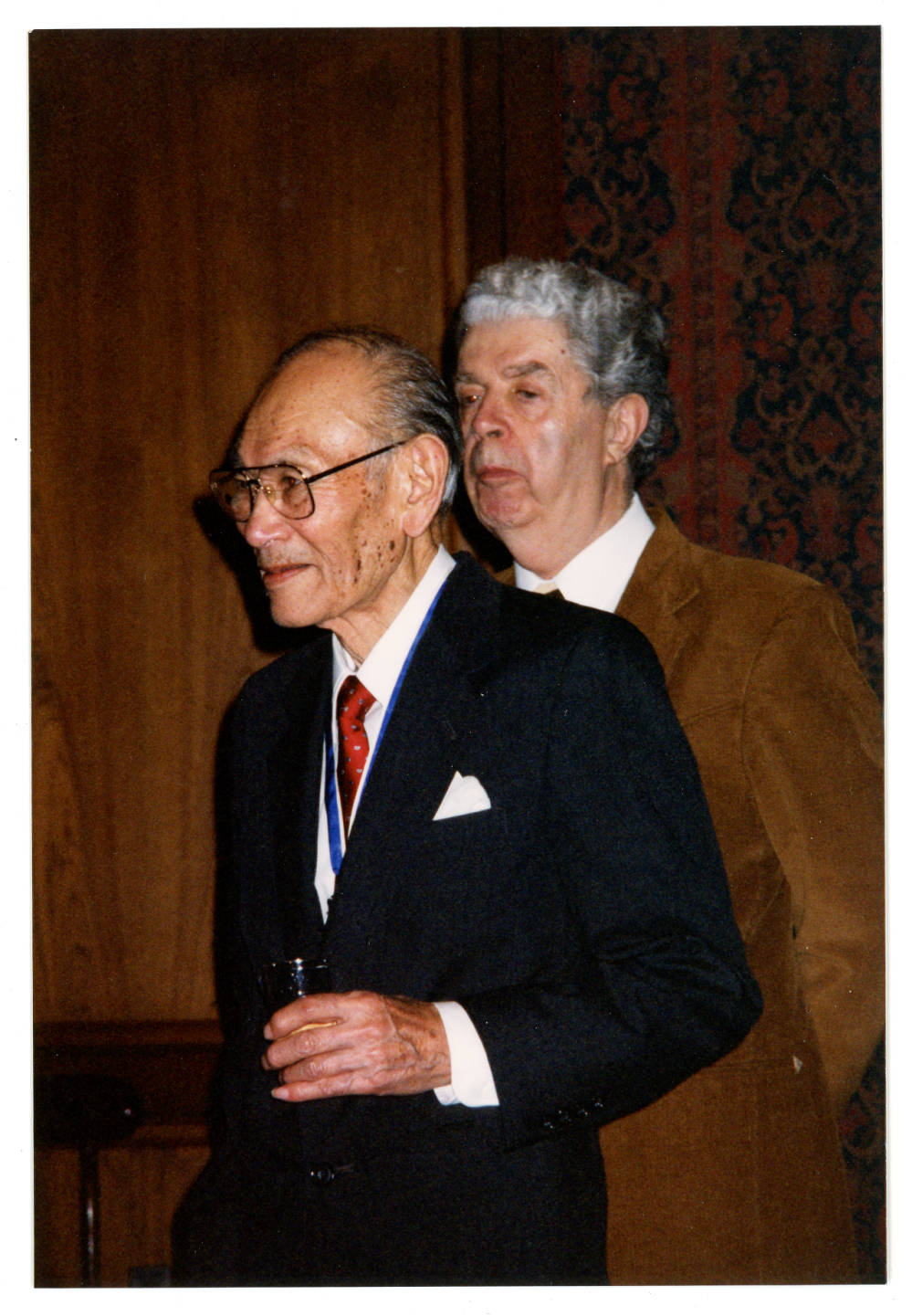 The following are some excerpts from the Fred Korematsu letters.

“I have received your letter and also the copy of my case. I have read the copy. It seems interesting to know the constitutional rights which have been voided etc. I know you and Mr. [Wayne] Collins were very busy in making such a fine work in my case. I am glad to hear you are helping the girl from Tule Lake [Mitsuye Endo?] I know she needs help, and I don’t think she need to worry very much with [American] Civil Liberties [Union] behind her to help.”
Tanofan Assembly Center 1942.

“It is terribly dusty here, the top soil here is like flour. Just a little wind and the dust rises like fog all over the Relocation Center, you can’t see ten feet in front of you, we all have to wear mask made of cloth. Also, inside of the Barrack became [an] inch thick with dust…”
ca. Oct. 13, 1942 Topaz Relocation Center

“… I have received word that I may have to go back to camp, since I am a probationer. Persons who are on probation are not allowed out of camp…Best wishes to you and Mr.(Wayne) Collins (attorney) in Circuit Court…”
February 4, 1943. Salt Lake City, Utah.

“…the drafting for the Army came up. But there are many American Citizens in camp, that are undecided, since they were treated like enemies of this country, and never was given trial to be proven loyal to this country, and now this draft is to be a new thing. So the camp had a vote on this new Bill. But here was the catch to this Bill, all those that voted (no) were not given privilege of going out of camp for no reason. Even if you had a job waiting for you etc….” March 27, 1943

“Well! Winter is here and I caught the flu couple of weeks ago, and I’m just getting over it. Salt Lake, is an awful place. Specially to get sick in. I believe it’s the high climate I am in. Because I never was sick like this before.”
November 7, 1943.

The primary sources that can be found online in CSUJAD provide ample opportunities to examine the WWII incarceration from every angle, but it is the letters, diaries, photos and other expressions of daily personal experience that democratize the historical record, humanize past experiences, and transform interpretation. CSUJAD is allowing a new generation to re-analyze what has already been discovered, attend to what may have been missed, and access hidden collections that have never been accessible before in order to develop a more nuanced record of the incarceration and how it challenged the civil liberties of all Americans.

The CSUJAD project’s mission is to improve access to CSU archival collections on the history of Japanese Americans, and to develop a functional model for ongoing planning and collaboration among the CSU archival and library communities. More than 46,000 items from 29 institutions across California have been digitized since its launch. Full descriptions of all the collections from the various partner institutions are included on the CSUJAD website. Eighteen California State University campuses (CSUDH’s contribution consists of more than 60 Japanese American-related collections) are participating and 11 other universities, historical societies, museums, educational centers and public libraries throughout the state.

The CSUJAD website has recently been updated to expand on the depth of the database and contextualize the growing collection of archival materials with a wide array of informational resources. Of particular note are illustrated timelines, interactive maps and two digital exhibitions that provide an overview of Japanese American history from immigration to redress and beyond. Teaching guidance is provided through standards-based lesson plans for secondary and higher education—more can be learned about Korematsu and the other Japanese American court cases in one of these. The Korematsu case was vacated in the 1984, but remained on the books until the Robert Court overruled it in 2018, ironically in a case that approved of a ban on travel of immigrants. Explanations about the use of terminology in the CSUJAD project, heavily influenced by Aiko Herzig Yoshinaga and other scholars, can be found along with guidance on how to effectively search the database. There is a wealth of practical and historical information to engage users, whether teachers and students, information professionals or the broader community of interpreters connected to the subject of Japanese American history.

The CSUJAD project has been funded by several grants since 2014, totaling $1.5 million. The grants have been awarded by the National Endowment for the Humanities (NEH); the National Park Service’s Japanese American Confinements Sites grant; the Haynes Foundation; the National Historical Publications and Records Commission (NHPRC); the California State Library’s California Civil Liberties Public Education Program and the family of Aiko Herzig Yoshinaga. Funding to digitize the California Historical Society collections came from the NHPRC and the NPS.

University Library Rapido Implementation
Stress Relief for Finals
Interview with the library Maggie Clarke
The Gerth Archives and Special Collections received funding from California Humanities and the National Endowment for the Humanities (NEH) to launch an Oral History program
Interview at the Library: Hallie Clawson