Researchers are welcome to drop in or schedule an appointment during our regular business hours, Monday - Friday, 9:00 a.m. - 4:30 p.m.

Here you will find 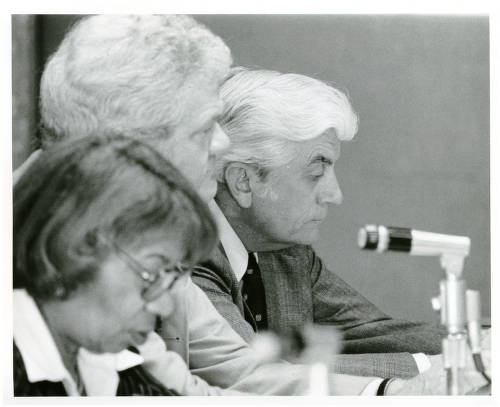 Navigate to the Digital Collections →

The CSU System Archives Digitization Project began in spring 2017. In the first two years of the project the CSU Reports Collection, the CSU Public Affairs photograph collection, the CSU Oral History Project, the CSU Board of Trustees minutes and agendas, and the CSU Board of Trustees audio collections are being selected, digitized, and described from their paper and magnetic audio formats for inclusion in the digital project.

The CSU System Archives Digitization Project is generously funded by The Office of the Chancellor.

About The CSU System Archives

The California State University System Archives was founded in 1979 with major collecting beginning in 1981. The CSU System Archives' collecting scope is limited to content of systemwide importance, often originating from executive and governing bodies including the Office of the Chancellor, the Academic Senate, the Board of Trustees, and other system offices and committees. Personal papers from chancellors of the system, including those of Glenn S. Dumke, chancellor during the formative years (1962-1982) of the system, are available in the System Archives.

The materials types in the archives are largely textual in nature and relate to the operational activities of the system. There is also a public affairs photographic collection and an audio oral history collection conducted in the late 1970s and early 1980s by the CSU Archives Advisory Committee. These oral histories were recorded to capture the experiences of individuals involved in the early years of the System in the 1960s and 1970s. Additionally, there is an audio collection of recordings of the Board of Trustees meetings from 1962 to 1973.

Mission of The CSU System Archives

The mission of the CSU System Archives is to collect, preserve, and create access to materials relating to the formation and progress of the system. The mandate complements the efforts of individual campus archives to collect and preserve the historical content of their own campuses.

About the governance of the System

Office of The Chancellor

The history and evolution of faculty and student governance can be followed in several of the CSU Archives collections. For more information about the current governing bodies see the links below.