About the Gerth Archives

The main responsibility of the Gerth Archives and Special Collections in the University Library is to serve the research needs of California State University Dominguez Hills students, faculty, and community. The Archives seeks to collect in subject areas receiving substantial and sustained attention within the University community. In addition, the Archives also collects material across a wide range of academic disciplines and subjects, including correspondence, photographs, pamphlets, organizational records, and other material that documents vital and unique personal, business, or organizational history. The Archives also collects materials on the history of CSUDH, the California State University System Archives, and rare or special collections publications and born-digital materials. You can read about the full scope of our collections and see highlights from those collections here.

The Gerth Archives and Special Collections also supports the digitization, description and curation of photographic, text-based and audiovisual materials from archival collections.

History of the CSUDH Archives

The first collection materials intended for the CSUDH University Library were generated in 1962 as the first library staff members collected books for the college and stored them in a warehouse. The first books were marked as property of California State College Palos Verdes.  In 1966, the Library was re-located to the Watt campus across the street from the current CSUDH campus. Another branch of the Library opened in the Small College a year or two later. The main library building opened in 1973 with an expansion opening in 2010.

The Archives and Special Collections Department started out as a small collection of late 19th century bestselling books such as the Wizard of Oz series in the 1960s. An informal university archives started out with an interest in the history and founding of the campus. This resulted in the collection of materials relating to planning of the grounds and curriculum for the campus. As soon as the campus moved to Dominguez Hills, there was an interest in the 1910 Los Aviation Meet at Dominguez Field that took place nearby. This interest helped start the 1910 Aviation Meet Collection.  In the late 1960s, History professors Judson Grenier and Donald Hata retrieved materials from a variety of Rancho San Pedro and Dominguez Family businesses including the Dominguez Water Company, the Watson and Carson Companies, the Del Amo Foundation and Nursery as well as some Japanese American materials. Additionally, Librarian Ken Bennett assisted with the Rare Books Collection and added a variety of Dominguez Family materials. In 1979 with the assistance of CSUDH President Donald R. Gerth, for whom the Archives is named, the Archives became the site of the California State Archives. Other early collections related to South Bay LA history and Compton History.  The Archives was among the first institutions to publish finding aids on the Online Archives of California in the late 1990s. The CSUDH Archives Digital Collection was first operational in 2006. 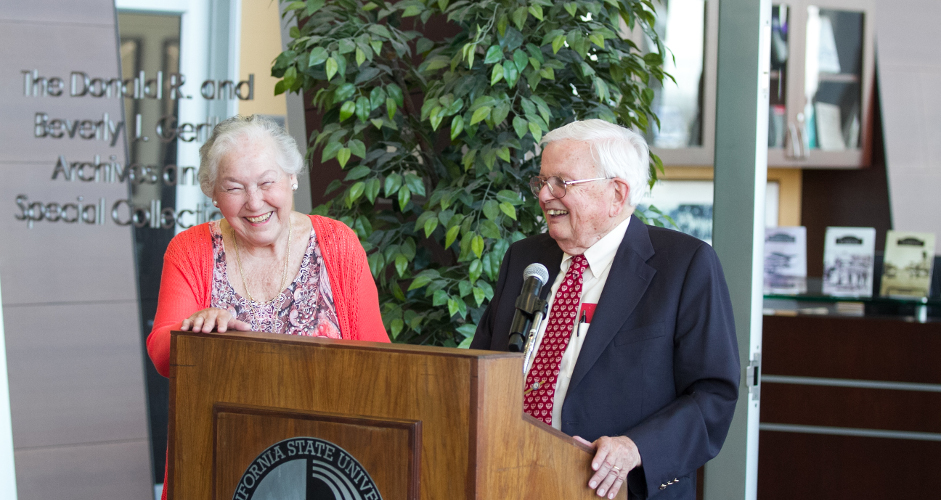